Racial disparities in education are the cumulative effect of generations of racism, divestment, and denied opportunities. 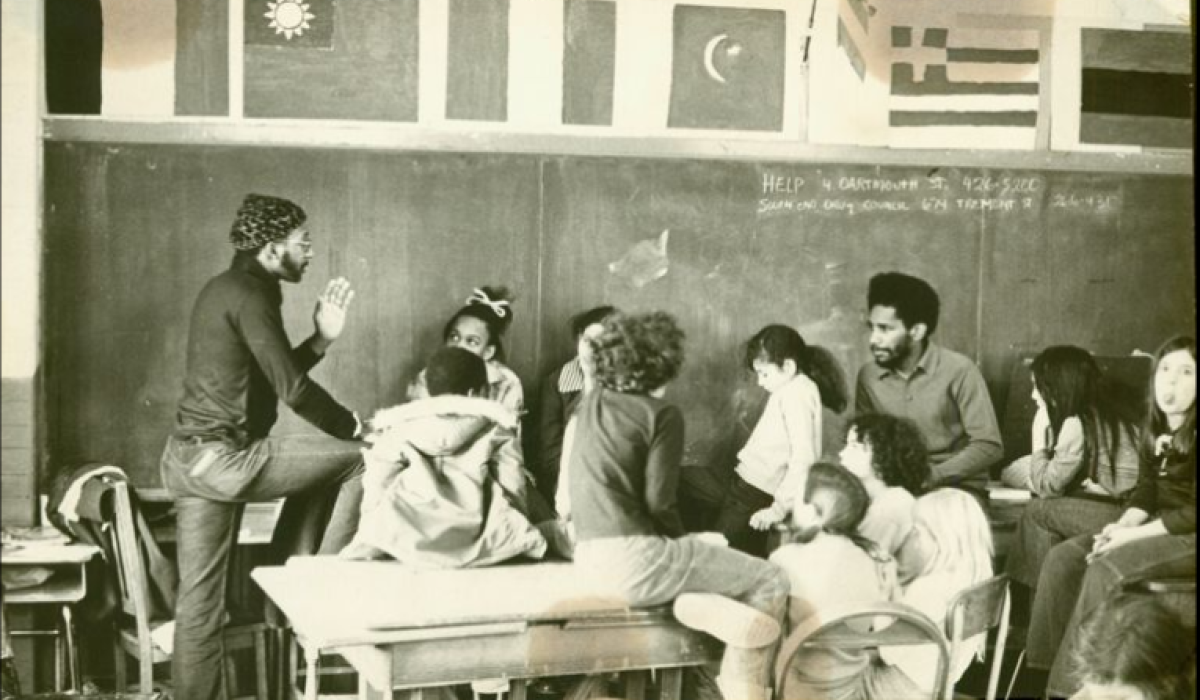 Students and teachers in a Boston public school classroom, circa 1973

As education in the United States has evolved over the years, one consistent – and significant – factor has been anti-Black racism.

Centuries of slavery and oppression led to a dual school system in which Black Americans were systematically denied access to quality education. The landmark 1954 Supreme Court decision, Brown v. Board of Education, famously declared that “separate is not equal,” but generations of Black Americans both before and after this decision were forced to defy laws and structural barriers to receive an education even close to equal.

Between 1740 and 1867, anti-literacy laws in the United States prohibited enslaved, and sometimes free, Black Americans from learning to read or write. White elites viewed Black literacy as a threat to the institution of slavery – it facilitated escape, uprisings, and the sharing of information and ideas among enslaved people. Indeed, literacy undermined the false foundation slavery was built on: the intellectual inferiority and inhumanity of African-descended people.

The small percentage of enslaved people who became literate did so at great risk – those who were caught were often violently punished, sold, or even killed. Because of the danger, enslaved people had to be strategic and resourceful in learning to read and write. They attended secret informal schools taught by free Blacks at night, covertly learned from white enslavers’ children, or found opportunities when enslavers were away.

Northern states were little better. Black education was generally viewed with suspicion and suppressed through legislation and threat of violence. For instance, when white schoolteacher Prudence Crandall opened a boarding school for Black girls in 1832 Connecticut, the state promptly passed a law requiring written permission from town officials for anyone seeking to teach Black students from other states. This empowered anti-Black racism on a local level and, facing escalating harassment and vandalism, Crandall closed the school after only two years.

After the Civil War, emancipated Black Americans who’d been denied educational access for centuries made learning a priority. They established schools at their own expense and advocated for universal public education. The development of Southern public schools for students of all races is indebted to Black voters and legislators of the Reconstruction era. Education was embraced as a safeguard of Black liberation, self-determination, and rights as citizens.

Unfortunately, strides made during this era were cut short by racism and white supremacy.

Southern schoolhouses and teachers, regardless of race, were targets of racist violence. Between 1864 and 1876, over 630 southern Black schools were significantly damaged or destroyed. Black Americans who moved to Northern urban centers, meanwhile, were segregated by anti-Black laws, policies, and cultural practices that denied them equitable access to schools.

Across the country, state governments used their power to reinforce school segregation and to fund white schools at the expense of Black ones. Black students were left with dilapidated school buildings, fewer teachers and programs, and limited curriculum options. Facing these injustices, Black educators countered by receiving exceptional academic credentials to provide Black students with quality education.

Although Brown v. Board of Education ended legal segregation in public schools, it did not end racial inequality in education. Freedom of Choice plans, private school vouchers, and white flight into suburbs perpetuated segregation and further concentrated wealth and school resources into predominantly white areas. In addition, many federal rulings after the Brown decision dismantled desegregation policies and strategies, and public schools today remain highly segregated by race, ethnicity, and socioeconomic status.

Black students face an uphill battle against a system built on centuries of racism, divestment, and denied opportunities. Improved educational outcomes for Black students today can only be achieved by addressing these historic, race-based inequities.

Explore a curated sample of Harvard research and resources related to anti-Black racism in education below.

African Americans pursued education through clandestine means, often in defiance of law and custom, even under threat of violence in a tradition of “fugitive pedagogy.” This book examines this tradition through the efforts of educator, historian, and Black History Month founder Carter G. Woodson.

Teaching White supremacy: America's democratic ordeal and the forging of our national identity (Harvard Key Only)

This book explores white supremacy's deep-seated roots in the U.S. education system through an in-depth examination of American textbooks and the systematic ways in which white supremacist ideology has infiltrated American culture.

Teaching the Hard Histories of Racism

This article outlines five principles to guide educators in teaching difficult topics, such as racism and colonialism, to students of all ages.

The systematic oppression of Black people throughout U.S. history has resulted in persistent unequal access to opportunity but decades of educational reform have not meaningfully reduced racial differences in standardized test performance, college going, or adult outcomes. This doctoral dissertation leverages rigorous quantitative research methods to contribute to and build on existing efforts to address racial inequalities through educational policy.

The Lingering Legacy of Redlining on School Funding, Diversity, and Performance

Between 1935-1940 the Home Owners' Loan Corporation (HOLC) assigned A (minimal risk) to D (hazardous) grades to neighborhoods that reflected their lending risk from previously issued loans and visualized these grades on color-coded maps, which arguably influenced banks and other mortgage lenders to provide or deny home loans within residential neighborhoods. This working paper leverages a spatial analysis of 144 HOLC-graded core-based statistical areas (CBSAs) to understand how HOLC maps relate to current patterns of school and district funding, school racial diversity, and school performance.

The School to Prison Pipeline: Long-Run Impacts of School Suspensions on Adult Crime

Schools face important policy tradeoffs in monitoring and managing student behavior. Strict discipline policies may stigmatize suspended students and expose them to the criminal justice system at a young age. This working paper estimates the net impact of school discipline on student achievement, educational attainment and adult criminal activity and finds that the negative impacts of attending a high suspension school are largest for males and minorities.

Educator Charlotte Eugenia Hawkins Brown was founder of the Palmer Memorial Institute in Sedalia, North Carolina, and active in the National Council of Negro Women and the North Carolina Teachers Association. She was the first Black woman to serve on the national board of the YWCA. She lectured and wrote about Black women, education, and race relations. This archival collection provides information about Charlotte Hawkins Brown's life and activities, the Palmer Memorial Institute, and Brown's continuing struggle to enlarge the school, the financial problems she encountered, and her constant fundraising efforts.

Read
Black Teacher Archive
As early as 1861, Black teachers founded “Colored Teachers Associations” to enhance educational opportunities for Black children, and to develop themselves as professionals, political actors and intellectuals. This archival initiative preserves the political and intellectual contributions of Black educators before 1970 by locating and digitizing the complete collections of journals published by “Colored Teachers Associations.”
Read

How can schools, educators, and families navigate the continued politicization and tensions around teaching and talking about race, racism, diversity, and equity? In this webinar panelists discuss what educators and families can do to make sure students are supported, learning, and prepared with the knowledge they need to understand their own histories and the diverse and global society they’ll enter.

In this seminar historian Donald Yacovone discusses his book "Teaching White Supremacy: America’s Democratic Ordeal and the Forging of Our National Identity" which explores white supremacy's deep-seated roots in the U.S. education system through an in-depth examination of American textbooks and the systematic ways in which white supremacist ideology has infiltrated American culture.

Harvard EdCast: The State of Critical Race Theory in Education

In this podcast educational researcher and pedagogical theorist Gloria Ladson-Billings discusses how she adapted Critical Race Theory from law to explain inequities in education, the current politicization and tension around teaching about race in the classroom, and offers a path forward for educators eager to engage in work that deals with the truth about America’s history.

The history of Black education is complex and rich, but often remains untold. In this podcast interdisciplinary historian Jarvis Givens explains how Black educators worked together to push back against oppressive school structures in a tradition of “fugitive pedagogy” that was passed down from generation to generation of Black educators.

What is the role of schools in teaching students, especially students of color, how to face oppression and develop political agency? In this podcast Daren Graves and Scott Seider, authors of "Schooling for Critical Consciousness" (2020), share the ways that educators and school leaders can help young people better understand and challenge racial injustices.