American racial inequality is rooted in policies of displacement, exclusion, and discrimination in urban and residential spaces. 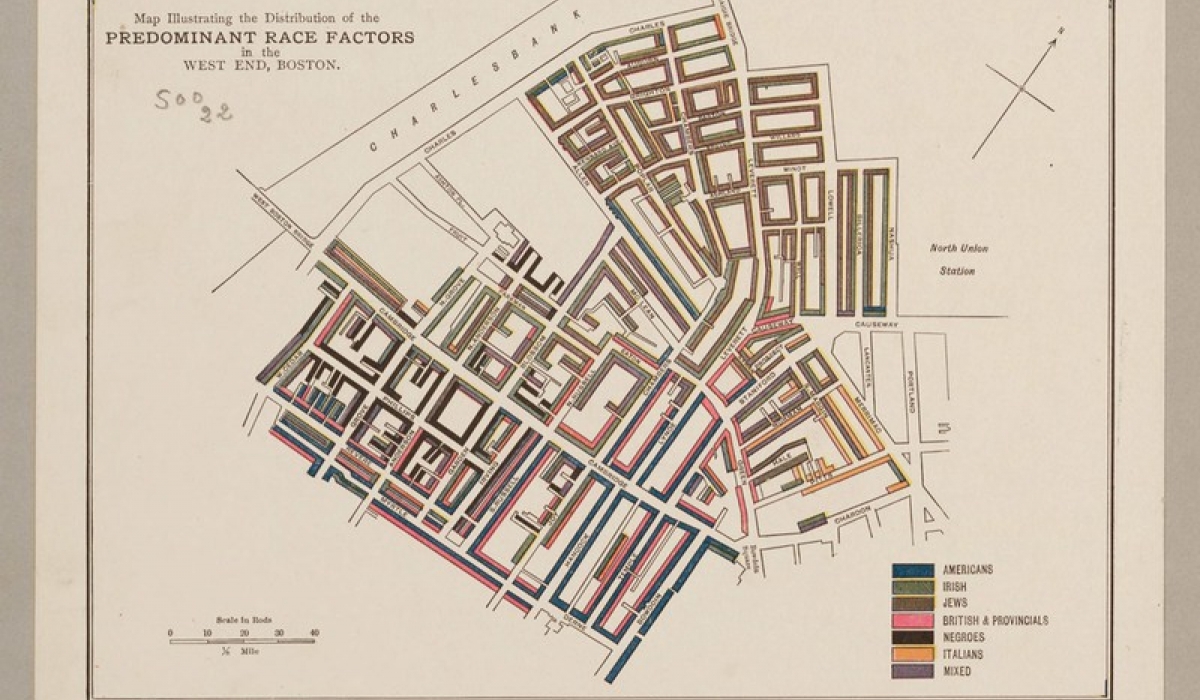 Map illustrating the distribution of the predominant race factors in the West End, Boston, circa 1903

Segregation has been illegal in the United States for decades, but many neighborhoods are unofficially segregated – and separate is not equal. Majority-Black areas of American cities and towns are overwhelmingly less desirable and less prosperous. The built landscape of the United States reflects a legacy of place-based racial inequality influenced by housing and urban development policies of the 20th century.

The economic prosperity experienced by most of America during and after World War II never really reached Black Americans. Federal financial assistance programs like the 1944 G.I. Bill helped many returning veterans buy homes, start businesses, or attend college, but racial discrimination in government and business meant Black Americans were left behind in the resulting housing boom. While white Americans flocked to subsidized homes in newly created suburbs, many people of color had to remain in cities with dwindling jobs, overcrowded housing, escalating poverty, and declining property values. They were restricted to specific neighborhoods formally, through discriminatory property owner policies and zoning laws, and informally, through racist mob violence.

Federal urban renewal programs from the 1950s to the 1970s displaced more than 300,000 families across the country, disproportionately razing Black neighborhoods in favor of commercial and industrial development. Any housing created by these projects was in smaller quantities and less affordable than before, or difficult to obtain without political connections, meaning most residents were forced to leave.

Interstate highway construction also began in the 1950s, prioritizing the needs of white suburban commuters over urban residents. New highways destroyed or isolated many Black neighborhoods, cutting them off from schools, stores, and economic opportunities. In some cases, as laws prohibiting housing discrimination were passed, segregation was built into the physical environment through strategically placed roads. Exhaust fumes and road runoff polluted the neighborhoods closest to highways, causing additional harm to their residents.

Understanding the historic development of spaces where people live and work is vital to understanding inequality in America. Racism, especially anti-Black racism, is threaded through the historical decisions and policies that shape life today.

The resources collected here document the historical dimension of race, space, and design, as well as propose equitable paths forward.

Explore a curated sample of Harvard research and resources related to anti-Black racism in space and design below.

The Impacts of Neighborhoods on Intergenerational Mobility I: Childhood Exposure Effects

Where you live impacts future success. This economic study of more than 7 million families in the United States shows that the neighborhoods in which children grow up shape their earnings, college attendance rates, and fertility and marriage patterns.

Blood, Shed, and Fears: The Resiliency of Racism

The Architecture of Reparations on Chicago’s South Side: Request for Proposal

This thesis project, which takes the form of a Request for Proposal, addresses paths to reparations for the Black communities of Chicago’s South Side after centuries of racism and exclusionary housing polices.

Stephen F. Gray: "We have a name for the uneven distribution of exposure and risk along racial lines, and it’s not COVID-19. It’s structural racism."

Black and brown Americans have died at disproportionately high rates during the COVID-19 pandemic. This article lays out the components of structural racism contributing to these rates and proposes policy changes in economic development, housing, and public domain infrastructure to address inequality.

A Shared Future: Fostering Communities of Inclusion in an Era of Inequality

What would it take to meaningfully reduce residential segregation and mitigate its negative consequences in the United States? In this volume, leading academics, practitioners, and policymakers examine different aspects of the complex and deeply rooted problem of residential segregation and propose concrete steps that could achieve meaningful change within the next ten to fifteen years.

This online exhibit illustrates the building of land in Boston through historic maps. Maps from insurance companies and the Boston Redevelopment demonstrate the sudden and dramatic reordering of urban spaces for urban renewal that led to the destruction and displacement of many communities.

Erich Lindemann (1900-1974) was a Professor of Psychiatry at Harvard Medical School and Associate Professor of Mental Health at Harvard School of Public Health known for his work in preventive intervention, particularly with subjects of grief, loss, and other forms of crisis. This archival collection includes Lindemann’s study of the effects of loss and disruption on the displaced families of Boston’s West End redevelopment, which was used to inform later urban redevelopment projects across the nation.

Jonathan Beckwith (born 1935) is the American Cancer Society Research Professor of Microbiology and Molecular Genetics at Harvard Medical School. Beckwith was Faculty Sponsor of Harvard University’s Campus Tenant’s Support Union (circa 1969-1975). This archival collection documents local community resistance to the expansion of Harvard Medical School into residential areas of Roxbury, Massachusetts including materials from the Roxbury Tenants of Harvard campaign.

Read
African American Design Nexus
At a time of unprecedented inequality and environmental crisis, the work of Black designers is invaluable in creating new paradigms for design practice and education. This website gathers African American designers in the design professions to showcase their craft, explore different geographies of design practice, and inspire change within design institutions to participate in adopting new approaches to elevate Black designers.
Read

In this panel the inaugural Just City Mayoral Fellows of the Mayors’ Institute on City Design discuss how to tackle racial injustices in each of their cities through planning and design interventions.

Racial Inequity and Housing Instability in Boston: Past, Present, and Future

Millions of Americans have long struggled to pay for housing, with communities of color additionally burdened by housing discrimination and historical race-based policies. In this panel experts explore the housing affordability crisis for people of color in Greater Boston as well as the long history of community activism in the area.

In this podcast activist and social practice artist De Nichols discusses the #DesignAsProtest movement, alternatives to profit-driven models of practice for designers, and the importance of self-care and collective care in the face of the white supremacist logics that linger in design culture.