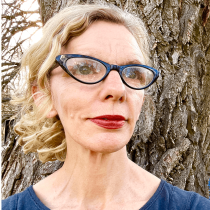 Christina Davis has served as the Curator of the Woodberry Poetry Room since 2008 and has received the Dean's Distinction and is a two-time recipient of the Dean's Impact Award for her work.

During her curatorship, she has worked to expand (and re-imagine) online access by creating the Listening Booth and launching the Poetry Room's YouTube Channel. She has also established the WPR Creative Fellowship program, the audio-seminars curriculum, the first poetry-related January Intensives, and a wide range of public programming series including the Oral History Initiative, Reel Time, Boston Originals, A Provocation, and the Vocarium Reading Series. She has also renewed the Poetry Room's role as a record producer, through a partnership with Fonograf Editions (featuring releases of LPs by Audre Lorde and John Ashbery).

In addition, she has been honored to oversee such donations as the John Ashbery Reading Library, the Anne Sexton & Her Kind archive, the Galway Kinnell sound recordings, and the notebooks of Fanny Howe, and has secured and stewarded several significant grants that enabled the Poetry Room to catalog the comprehensive recording collection of sound pioneer Frederick C. Packard, Jr., and to discover previously uncataloged recordings by John F. Kennedy, Jr. and Ralph Ellison. And, in the great technological tradition of the Poetry Room, she has actively partnered on several pilot studies, most recently on one that explores ways to enhance the encounter with (and annotation of) sound recordings.

She is the award-winning author of An Ethic (Nightboat, 2013) and Forth A Raven (Alice James, 2006) and the manuscript-in-progress The Intrabody. Her poems, translations, and essays have appeared in such journals as the American Poetry Review, Boston Review, Brooklyn Rail, Jubilat, The Nation, The New Republic, Paris Review, and Poetry Magazine. She is the recipient of residencies from the Bellagio Center/Rockefeller Foundation, the Dora Maar House (France), the Inside-Out Museum (Beijing, China), the MacDowell Colony, Yaddo, and the American Academy in Rome.

Throughout her 20-year career, Davis has dedicated herself to the service of writers (and literature) and to supporting and sustaining artistic communities and educational resources through her work at such organizations as Poets House, New York University, Teachers & Writers Collaborative, and the Poetry Society of America. She is a graduate of Oxford University and the University of Pennsylvania, and seeks to continue to learn....